Charleston Promise Neighborhood hosted the second annual Community Olympics on Saturday, May 7th at the Danny Jones Complex in North Charleston. All four of our neighborhood schools (Sanders-Clyde, Chicora, Mary Ford, and James Simons) participated in a variety of competitive games, entertaining activities, fellowship and delicious food. We were so grateful to have volunteers from Nucor, Cummins, TD Bank and SunTrust Foundation.

The day itself was absolutely beautiful! Clear skies and cooler temperatures made a perfect setting for a day that was packed full of community and school engagement. After registration, our amazing emcee, Anton Gunn, kicked off the day with songs and announcements. Families gathered on the field with music setting the tone.

Students, parents, and school staff all competed in 6 sets of games to earn points for their school. The winner of each game was allotted a certain amount of points, with the totals being tallied after the culminating basketball championship. 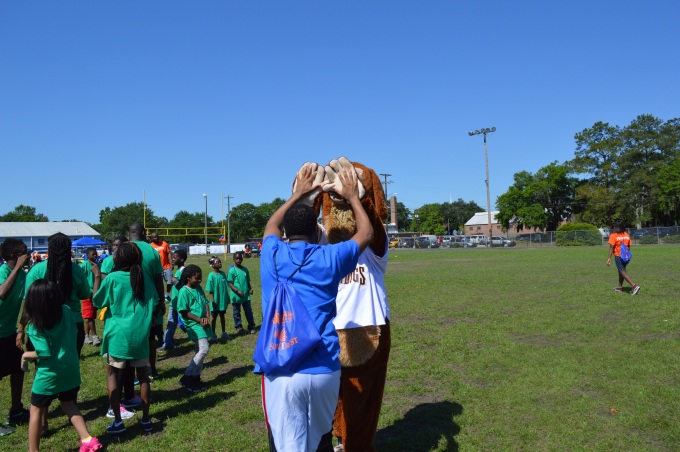 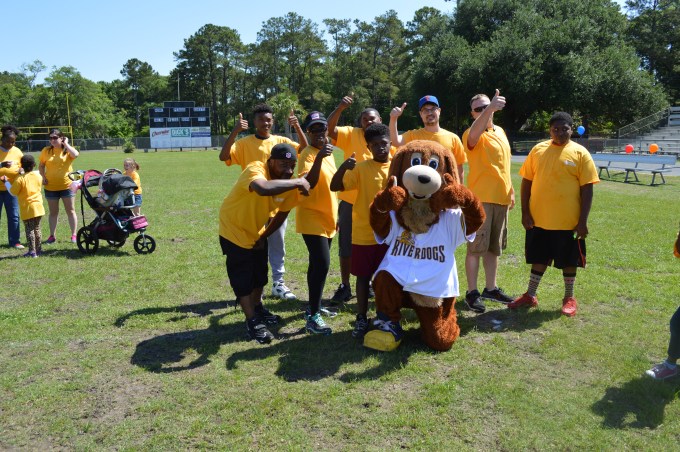 The first “Olympic Event” was the Relay Race. Students showed-off their speed skills as bystanders cheered them on. Next on the schedule was the Hula Hoop competition. Impressive demonstrations of hula hooping abilities were shown as DJ Dre Gunn provided music to keep the energy high. The Sack Race followed, and this crowd favorite certainly did not disappoint. The Water Balloon Toss was a barrel of laughs, and River Dogs Mascot, Charlie, even got in on the action! Things really heated up during the Tug of War competition when volunteers were able to compete against each other, Nucor versus Cummins, as well as a highlight of the day: TD Bank versus SunTrust on the ropes. The main event was most definitely the Basketball Championship. After moving inside the gymnasium, Mary Ford and Chicora dueled on the court, followed by an equally exciting game from Sanders-Clyde versus James Simons. The winners of both games competed against one another in the final event of the day, a champion versus champion game. In the end, Mary Ford took first prize of the day after scoring the most amount of points. Several students won bicycles (donated by Nucor) in the highly anticipated raffle, and everyone enjoyed delicious hotdogs and hamburgers. 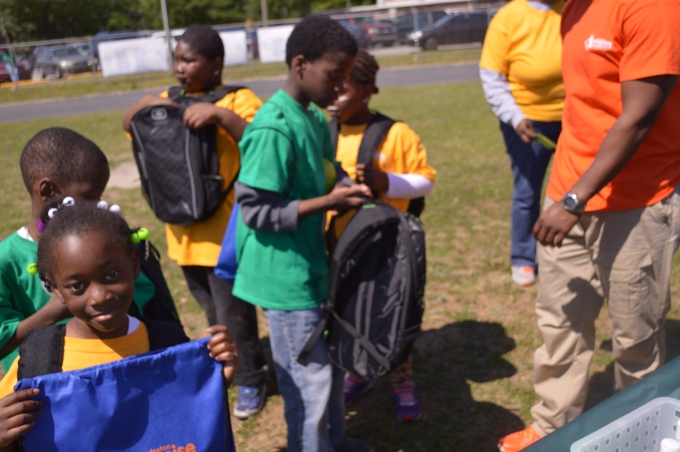 SunTrust Bank hosted a reading corner underneath of their Corporate Sponsor tent. The books they read to students were based on delivering the message of financial literacy. Putting the importance of saving early on into words the students could understand and relate to was a great addition to the day. SunTrust also gave out “swag bags” with school supplies inside. Many thanks to this wonderful sponsor!

The event’s other Corporate Sponsor, TD Bank came with 200 book bags and distributed them to participating students. At their table, students were presented with a book bag and also spun a wheel to win other prizes. Smiles were plentiful as students received their brand new book bags! Thanks TD Bank!

Overall, the day was fantastic! Heather, a parent of a student at James Simons said her family had fun and “shared a lot of laughs”. Her husband really got into the competitive spirit as he played on the James Simons basketball team! Sidney, a mother of three students at Sanders-Clyde said her favorite part of the day was the tug of war game because it was nice to see her children working together. Tyrone, the computer lab assistant at Chicora said that the basketball game was the highlight of his day because he played college basketball. Getting to play alongside his students brought back memories for him, and helped him form new ones outside of the school setting with his students. Tim, a father from Mary Ford said,”Getting all the kids interacting and learning about team work, the spirit of competition, and community involvement is important and Community Olympics made this task fun”.

It’s safe to say that a good time was had by all! We could not have had a successful day without the support of our four schools, generous corporate sponsorships from SunTrust Foundation and TD Bank, and eager volunteers from Nucor and Cummins. Thanks to all who made this event possible. We look forward to an even bigger and better Community Olympics in 2017!

← Prev: E-news Next: {STEM}ming Out From the Classroom →

Teens Talk It Up: Student Poems on Social Justice and Cultural Awareness

In the News: The Post and Courier’s Commentary: As South Carolina Recovers, Lets Make Equity a Priority